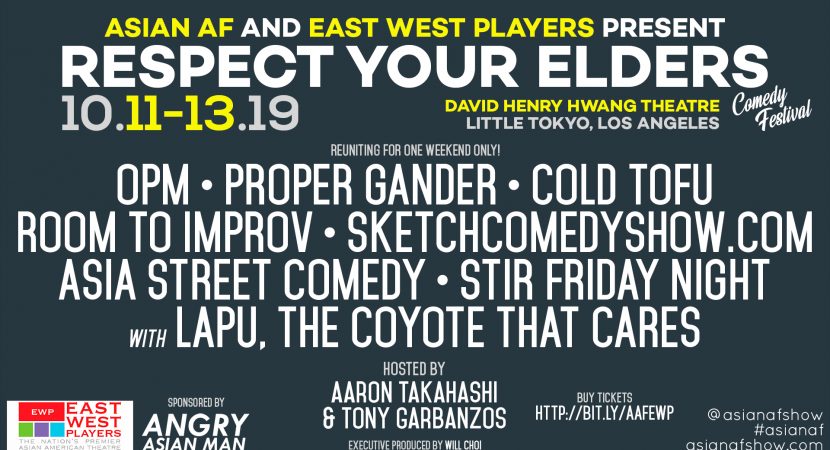 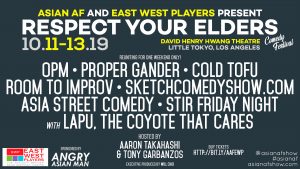 The first event in the series, Respect Your Elders! Comedy Fest (October 11, 12, and 13, 2019) is produced withAsian AF – the premier Asian American

comedy variety show with monthly performances in Los Angeles and New York. Asian AF spotlights the best Asian American actors, stand-up comedians, improvisers, sketch performers, musicians, storytellers, and more. It has generated the bi-coastal, spin-off performances Filipino AF, South Asian AF, and Gaysian AF. The three day festival in partnership with East West Players will spotlight Asian American comedy troupes that were trailblazers in the past three decades, many of them reuniting especially for the event.

“The idea for Respect Your Elders! came from a series of social media posts of the same name from Asian AF during Asian Pacific American Heritage Month (APAHM),” says festival producer, actor Aaron Takahashi. “Some of the posts featured Asian American sketch and improv groups that were popular in the 80’s, 90’s and 2000’s.  After I wrote an entry for Asia Street Comedy (an Asian American sketch comedy show on cable TV), people were suggesting that we do a reunion show.  With the help of Will Choi and Tony Garbanzos, we have taken this idea one step further, and have asked many of these pioneering Asian American sketch and improv groups to assemble for one night only (actually, two nights only) for a performance, where we can recognize these groups for the trailblazers that they are, opening doors, paving the way, and providing inspiration for today’s Asian American comedic talent.” Takahashi is a former member of three troupes in the line-up: Asia Street Comedy, OPM, and Cold Tofu.

Featured performances at Respect Your Elders! Comedy Fest will include:

OPM (sketch), aka “Opening People’s Minds,” was founded in Seattle by Leroy Chin (and, ahem! David Kobayashi and Roger Tang…the Revue).  Current Artistic Director Charles Kim has been with the group since 1997.  They are a multicultural, award-winning sketch comedy troupe whose topical and edgy sketches have garnered numerous awards in Los Angeles, San Francisco and Vancouver.  Kim, along with Ewan Chung, produce the shows.  With no barriers to their creativity, no studio telling them where the line is, and no one who could dismiss their vision or truth, OPM continues to prove to themselves and everyone who comes to their shows that APA-featured stories and performers can be funny and rock the house.

Lapu the Coyote that Cares (sketch) was founded in 1995 by Randall Park (ABC’s Fresh Off The Boat), David Lee, and Derek Mateo. LCC consists primarily of UCLA students and young professionals from various backgrounds, majors, and ethnicities who have come together through a common love for performing. Their main goal is to promote a voice for Asian American creative expression.  With a repertoire consisting entirely of original scripts, each show stands as an exhibition of new writers and material. Initially producing plays and short scenes, LCC has since expanded its scope to include film and video, dance, improvisational comedy, spoken word, and visual art.  The group has grown to become the largest Asian American college theater group in the country.

Cold Tofu (improv) was founded in 1981 by Marilyn Tokuda, Denice Kumagai, Judy Momii and Irma Escamilla. It is the nation’s first and longest running Asian American improv comedy troupe.  During a time when comedy was not a viable path for Asian American performers, these four founding members wanted to provide opportunities for Asian American actors to perform and explore comedy.  Stocked with six-packs and chips, the core group met regularly at each other’s homes exploring the new territory of Asian American comedy. Though touted as being the first Asian American improv group, Cold Tofu’s roots are multicultural.  Today, under current Artistic Director Jully Lee, Cold Tofu’s main cast performs improv shows regularly in Little Tokyo and throughout Los Angeles. They also teach workshops for actors and non-actors who wish to explore their creative expression.

SketchComedyShow.com (sketch) was co-founded by Eddie Kim and Brian Corpuz, both Theatre Rice alumni from UC Berkeley. They wanted to continue the kind of work they had done in school, writing original sketches. Through Projekt Newspeak, they put together a cast and started producing sketch comedy shows.  The group developed great chemistry and characters, and made amazing use of music, physicality, and silence. By 2012, several cast members from SketchComedyShow.com moved on, but their legacy lives on. They showed audiences that an Asian American sketch comedy group can be funny without having to center their jokes explicitly about being Asian American.

Stir-Friday Night! (sketch) was founded by Quincy Wong and Keith Uchima in Chicago in 1995.  As an ensemble of Asian-American actors/writers, they travel the nation performing improv and sketch shows that educate all audiences, from an Asian- American perspective. Their diverse cast keeps audiences laughing while delivering messages with which they can identify.  They are a fixture in Chicago’s comedy scene.  Notable alumni include Danny Pudi, Steven Yeun, and Mary Sohn.

Propergander (sketch) was started circa 1999 by Randall Park and other alums of the UCLA group Lapu, the Coyote that Cares (also founded by Park) who still wanted to tell universal, comedy driven stories from an Asian American perspective after leaving LCC.  Propergander produced original plays and one-acts, many of which were written by Park and fellow LCC alum Michael Golamco (Screenwriter of Netflix’s Always Be My Maybe).  The shows were irreverent, risk-taking, and at times downright weird.  Although they sold out shows, this was a time when the industry was not actively seeking out Asian American talent.  They didn’t believe that Asian American stories could be relatable to a “mainstream” audience.  So, around 2005, Propergander closed up shop.

Room to Improv (improv) is an Asian American improvisational theatre troupe that was created in 2002 by CSUN alum Elvin Lubrin, as an act for that year’s Festival of Philippine Arts and Culture (FPAC). After their first performance at FPAC, Room to Improv continued to perform at various community events and started producing their own monthly show every first Friday of the month.  Since its inception, Room to Improv has been entertaining diverse audiences with unscripted, unrehearsed scenes and games. The cast’s high-energy hijinks and wacky spontaneity are inspired by audience suggestions and interaction.  They strive to express their unique perspectives on the Asian American experience through entertaining, compelling stories filled with laughter and heart.  Their current Artistic Director is Earl Baylon.

Crazy Talented Asians (October 25 and 26, 2019), the second event in the series, is a two-night celebration of Asian American talent curated by singer/songwriter AJ Rafael. Headliners will include The Filharmonic (Friday, October 25) and Mama Bares (Saturday, October 26). Crazy Talented Asians has previously been produced by Rafael as a regular, one-night only event at the Rockwell Table and Stage, as well as a benefit performance at East West Playersduring the run of the Spring 2019 musical Mamma Mia!

“I’m excited to host Crazy Talented Asians (CTA) at East West Players because we share the same mission of making sure Asians are represented not only in the mainstream but for that kid in the audience who sees someone like them on that stage doing something they might want to pursue when they grow up,” says Rafael. “I’m honored to share the stage with these performers who are not only amazing at what they do, but who are proud of their identity and culture. These are artists who are aware of the responsibility they have to show that Asian Americans don’t have to just give in to the stereotypes we were given by the media.”

Rafael elaborates, “Crazy Talented Asians started way before it even existed, making videos in my living room with a bunch of my friends who just loved music and wanted to jam. A lot of those friends happened to be Asian, and we used YouTube & social media because it was the only platform we could be celebrated for who we were. CTA is that, a live band, and some of my friends and family bringing that to the East West Players stage to celebrate a night of dance, poetry, and music,”.

Featured performances for Crazy Talented Asians will include:

The Filharmonic (The Late Late Show with James Corden, The Sing-Off) are an LA-based a cappella group of Filipino-American youngsters who were featured in NBC’S hit musical competition The Sing-Off with much to sing about. The 5-piece vocal group made the semi-finals, joined The Sing-Off national tour, and were featured in the Universal Pictures hit movie Pitch Perfect 2 setting off a viral sensation after their Late Late Show appearance. The Filharmonic brings their unique blend of hip hop, pop and 90’s nostalgia to more than 150 college stages nationwide, and was named the #1 college booked entertainment group of the year in 2016. The Filharmonic includes Jules Cruz– Vocal Bass, Joe Caigoy – Tenor, Trace Gaynor – Tenor, Niko Del Rey – Beat Boxer, and VJ Rosales – Tenor.

Mama Bares are four fierce and humorous women sharing their stories of motherhood, careers, and family through music.  Oh, and they just happen to be extremely talented singers who have graced the stage in Broadway productions, which include Miss Saigon, Les Miserables, and Wicked. Hear the Mama Bares roar! The Mama Bares & Baby Bares include Broadway Stars Deedee Magno Hall, Jennifer Paz, Joan Almedilla, Ai Cheung and their children.

Performers appearing both nights include: