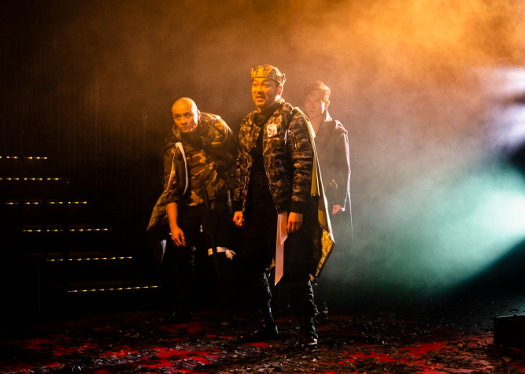 Through this program NAATCO will establish relationships with theatres around the country to implement strategies for the inclusion of Asian Americans in all aspects of its partners’ practices. NAATCO, the OBIE Award-winning National Asian American Theatre Company, is proud to announce the NNPP’s anchor partners: Long Wharf Theatre (CT); New York Theatre Workshop (NY), Soho Rep. (NY), and Two River Theater (NJ).

“A spotlight shines on ‘inclusion and belonging’ in American culture today. Yet despite an ever- growing national movement among Asian American theatre artists and companies to establish strong sustainable communities, Asian Americans remain on the margins of this light, continuing to be represented in stereotypical and formulaic ways, when represented at all. Our partners will join our efforts to foster and create more expansive representations of Asian Americans, on stage as well as behind the scenes. Together, we will augment and fortify these efforts to reflect the multiplicity of cultures, races, and ethnicities that defines this country and keeps our theatre vital,” said Ms. Katigbak.

Jacob Padrón, Artistic Director of Long Wharf Theatre says, “Long Wharf Theatre is honored to partner with the venerable National Asian American Theatre Company (NAATCO) as they launch this thrilling initiative to amplify the voices of Asian American artists across the country. Through the brilliant leadership of Mia Katigbak, NAATCO has been steadfast in their commitment to build a more inclusive American theater and we at Long Wharf are inspired by this call to action. We must work together, in community, to support NAATCO’s necessary expansion and we look forward to this meaningful partnership.”

“We look forward to building on our existing relationship with NAATCO through this visionary partnership. Mia has always been a role model for me personally, as an artist, producer, and advocate, so it’s a dream to be able to collaborate with her and NAATCO to develop and produce the work of Asian American playwrights here at Soho Rep. NAATCO has led the way in representation of Asian American performers in classic plays, and we’re excited to be a part of this new expanded vision for Asian American representation in our field,” said Meropi Peponides, Director, Artistic Development and Producing, Soho Rep.

The NNPP’s partners have committed to four actions:

2) Plan a series of pre- or post-performance events supplementing the productions and highlighting Asian or Asian American panelists and speakers.

3) Institute a plan for outreach to Asian Americans in the community to encourage their participation in all aspects of the partners’ operations.

4) Take the next step towards sustaining Asian American presence in the partners’ programming by announcing one or more productions for upcoming seasons that conforms to one of NAATCO’s four programs. This announcement should occur by the end of the first collaboration.

NAATCO is currently engaged in confirming new partners from around the country. The next cohort is expected to be announced this fall. The NNPP will contribute funding to each of our partners to support this effort. In partnership, we can change the world!

Under the leadership of Founding Artistic Producing Director Mia Katigbak and co-founder Richard Eng, NAATCO was founded in 1989 to assert the presence and significance of Asian American theatre in the United States, demonstrating its vital contributions to the fabric of American culture. NAATCO puts into service its total commitment to Asian American theatre artists to more accurately represent onstage the multi- and inter-cultural dynamics of our society. By doing so, they demonstrate a rich tapestry of cultural difference bound by the American experience. The enrichment accrues to each different culture as well as to America as a whole.

NAATCO was the recipient of the Obies’ Ross Wetzsteon Award, the Lucille Lortel Award from the League of Professional Theatre Women for their work “highlighting the multi- and intercultural dynamics of our society” and the Rosetta LeNoire Award from Actors’ Equity Association in recognition of its contribution toward increasing diversity and non-traditional casting in American theatre. NAATCO was recently nominated for a Drama Desk Award for Outstanding Revival of a Play, as well as Outstanding Costume Design for a Play for last season’s acclaimed production of Henry VI: Shakespeare’s Trilogy in Two Parts.

Additionally, at this year’s ceremony, NAATCO founder and Artistic Producing Director Mia Katigbak was honored by a Special Drama Desk Award: “the backbone of the Off-Broadway scene, we acclaim her for her performances this season in Henry VI: Shakespeare’s Trilogy in Two Parts, The Trial of the Catonsville Nine, Peace for Mary Frances and Recent Alien Abductions. This award also recognizes her vital presence as the artistic director of NAATCO and her sustained excellence as a performer and mentor.”

Established in 1965 at the start of the regional theatre movement, Long Wharf Theatre was born on the notion that New Haven deserves an active culture built with the aid of community leaders and patrons of the arts. A theatre of international renown, the theatre has a historic commitment to commissioning, developing, and producing new work that has become a part of the modern American canon. More than 30 Long Wharf Theatre productions have transferred to Broadway or Off-Broadway runs, three of which—Wit, The Shadow Box, and The Gin Game— won the Pulitzer Prize for Drama.

They were among the earliest recipients of the Tony Award for Outstanding Regional Theatre (1978) and have earned numerous accolades, including Tony, New York Drama Critics Circle, and Obie Awards; a Margo Jefferson Award for the Production of New Work; and nominations and Connecticut Critics Circle Awards in nearly every category.

Under the guidance of Artistic Director Jacob G. Padrón and Managing Director Kit Ingui, in partnership with a dedicated staff and Board, Long Wharf Theatre annually engages 50,000 people through productions, arts education programs, and community partnerships. Now in its 55th year, it is a company with, by, and for its community, activating a lifelong conversation with every person who walks through its doors, using the stories on its stages to catalyze a movement to better our world.

We’ve mounted over 150 productions from artists whose work has shaped our very idea of what theatre can be, including Jonathan Larson’s Rent; Tony Kushner’s Slavs! and Homebody/Kabul; Doug Wright’s Quills; Claudia Shear’s Blown Sideways Through Life and Dirty Blonde; Paul Rudnick’s The Most Fabulous Story Ever Told and Valhalla; Martha Clarke’s Vienna: Lusthaus; Will Power’s The Seven and Fetch Clay, Make Man; Caryl Churchill’s Mad Forest, Far Away, A Number and Love and Information;

NYTW’s productions have received a Pulitzer Prize, 25 Tony Awards and assorted Obie, Drama Desk and Lucille Lortel Awards. NYTW is represented on Broadway with Anaïs Mitchell’s Hadestown developed with and directed by Rachel Chavkin and the recently announced Sing Street, based on the motion picture written and directed by John Carney, with a book by Enda Walsh, music and lyrics by Gary Clark & John Carney, directed by Rebecca Taichman.

Founded in 1975, and in its theater on Walker Street since 1991, Soho Rep. provides radical theater makers with productions of the highest caliber and tailor-made development at key junctures in their artistic practice. Artistic autonomy is paramount at Soho Rep.—the company encourages an unmediated connection between artists and audiences to create a springboard for transformation and rich civic life beyond the walls of its small theater. In 2014, Soho Rep. was honored with a Drama Desk Award for Sustained Achievement.

In June 2019, Two River was nationally recognized by USA TODAY as one of “10 great places to see a play” across the U.S. Two River serves thousands of students and community members through arts and humanities programs at the theater, in schools and throughout its region. Two River Theater is led by Artistic Director John Dias and Managing Director Michael Hurst.

For more information about The NAATCO National Partnership Project (NNPP) or any of NAATCO’s programs, visit www.naatco.org