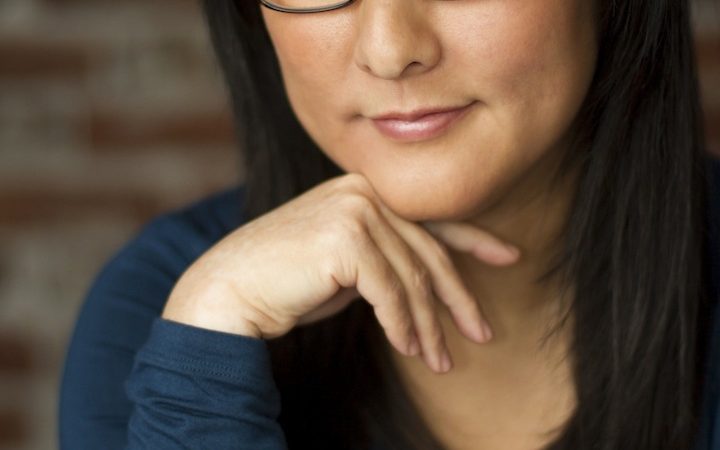 Recipient of a San Francisco Art Council Grant in Literature, she has also received a Fund for New American Plays Grant, a Rockefeller MAP Grant and has been a co-winner of the Mixed Blood Theater’s Playwrights competition. She was also chosen for the O’Neill National Playwrights Conference, the Sundance Playwrights Lab, an Asian Theater Workshop Fellowship with the Mark Taper Forum, and a San Francisco Grants for Arts Commission through Z Space Studio. In 2015 Cherylene published her personal memoir Just Like Really An Uncommon Chinese American Memoir. On March 18, 2016, Cherylene died in her sleep with her two sisters at her side

ED BOK LEE’s first book, Real Karaoke People (New Rivers Press), was a recipient of the Many Voices Project (MVP) Award and “contains outrage…tenderness [and] searing honesty…vital to the American landscape. The vitality of the country, its capacity to absorb the rich and the strange, is nowhere clearer…” (San Francisco Chronicle).

Lee attended kindergarten in Seoul, grew up in North Dakota and Minnesota, and has since lived in a half-dozen cities around the world. He has studied Slavics at the Universities of California—Berkeley, Minnesota, Kazakh State—Almaty, Indiana University, and holds an MFA from Brown University. Various writing awards include grants from the National Endowment for the Arts, the Minnesota State Arts Board, the Loft Literary Center, SASE, and the Jerome Foundation.

Ji Hyun is a playwright moonlighting as investigative reporter. She has covered the University of Michigan’s affirmative action trials for Asian Diversity and the recent sweatshop cases in California for Hyphen magazine. She is a graduate of Columbia University. 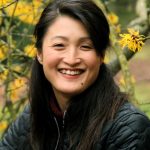 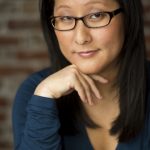 Maggie Lee is a writer, actor, producer, lighting designer, and puppet mistress for the Pork Filled Players, Seattle’s only Asian American sketch comedy group. She has also designed lights and puppets for other local theater companies, such as ReAct, GreenStage, Open Circle Theater, and SIS Productions.

In 2006, she adapted a stage version of H.P. Lovecraft’s The Thing on the Doorstep for OCT’s The Colour Out of Space, and will be a contributing writer for their original Lovecraft-inspired show Necronomicon in October 2008. She has a BA in English and a minor in Lighting Design from UC Berkeley. 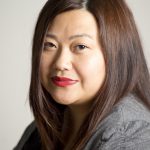 MAY LEE-YANG is an award-winning playwright, poet, prose writer, and performance artist. She has been hailed by Twin Cities Metro Magazine as “on the way to becoming one of the most powerful and colorful voices in local theater.” Her theater-based works have been presented locally at Mu Performing Arts, the Center for Hmong Arts and Talent (CHAT), Intermedia Arts as well as nationally at Out North Theater (Anchorage) and the National Asian American Theater Festivals in Los Angeles and Philadelphia.

She is the author of the children’s book The Imaginary Day (MN Humanities Center/Council on Asian Pacific Minnesotans) and has been published Bamboo Among the Oaks: Contemporary Writing By Hmong Americans, Water~Stone Literary Journal, The Saint Paul Almanac, and others.

She is a 2016 recipient of the Ordway Sally Award for Arts Access and a 2011 Bush Leadership Fellow. She has received additional support for her artwork from the Minnesota State Arts Board, the MRAC Next Steps Grant, the Jerome Travel Grant, the National Performance Network, the Midwestern Voices and Visions Residency Award, the Playwright Center, and the Kundiman Retreat.

She also teaches creative writing and theater to teens and elders through COMPAS, St. Paul Conservatory for Performing Artists, and Mu Performing Arts. In other parts of her life, she is a co-founder of Community Artist Leadership Initiative (C.A.L.I.), an organization whose mission is to build the leadership capacity of marginalized artist and is a co-founder of F.A.W.K. (Funny Asian Women…K), a collaborative to empower Asian women through comedy. 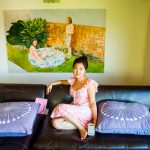 Soo-Jin Lee is a playwright and an English teacher.

Born in South Korea, Ms. Lee was raised in Virginia. She holds a BA from George Mason University and an MFA from the University of Texas at Austin. She is a proud member of the Dramatist Guild.

Lee, Suzanne
Bio: Suzanne Lee is a LA-grown and New York-based playwright/screenwriter/entrepreneur. Her current project is adapting WORTH into a screenplay. She is a MFA candidate at the Yale School of Drama. 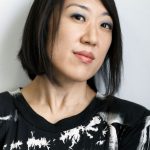 Young Jean Lee has directed her plays at the Ontological-Hysteric Theater and Soho Rep. She has performed with the National Theater of the United States of America (What’s That On My Head!?!), studies playwriting with Mac Wellman at Brooklyn College, and is a member of 13P. With her Straight White Men, she became the first female Asian American playwright to appear on Broadway. 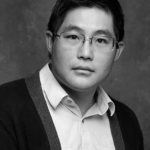 Michael Lew was a 2003-2004 directing resident at Playwrights Horizons, assisting on Craig Lucas’ Small Tragedy, Jon Robin Baitz’s Chinese Friends, and Erin Cressida Wilson’s Wilder. He assistant directed the Drama Dept’s 2004 Downtown Plays, and has also assistant directed at the Mark Taper Forum and for Primary Stages. He has held literary residencies at Playwrights Horizons and La Jolla Playhouse and was associate artistic director of Gorilla Repertory Theater, producing their 2003 season. He holds a B.A. in English and Theater Studies from Yale University and was in the 2005 Lincoln Center Director’s Lab. 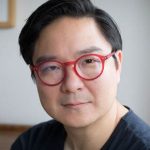 Kenneth Lin is an award-winning playwright and screenwriter whose plays Warrior Class, Pancakes, Pancakes!, Po Boy Tango, said Saïd, Agency*, Intelligence-Slave, Genius in Love and The Lynching of a White Man In Rural, CA have been performed throughout the world. He is a member of the theater/music/film collective New Neighborhood.

Lin, Weiko
Based in Los Angeles, Weiko Lin holds a MFA in Film and TV from UCLA. As a member of WGA-west, he is also the recipient of a Samuel Goldwyn Writing Award. Weiko is a visiting lecturer in screenwriting at UC San Diego and an instructor at East West Players. 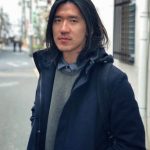 Yilong is a New York-based bilingual playwright, originally from Chongqing, China. Currently, he is a resident playwright at The Flea Theatre and a proud member of Ensemble Studio Theatre’s Obie Award-winning playwrights group Youngblood. 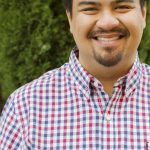 Jeffrey Lo is a Filipino-American playwright and director based in the Bay Area. He is the recipient of the 2014 Leigh Weimers Emerging Arist Award, the 2012 Emerging Artist Laureate by Arts Council Silicon Valley and Theatre Bay Area Director’s TITAN Award. His plays have been produced and workshopped at The BindleStiff Studio, City Lights Theatre Company and Custom Made Theatre Company. His play Writing Fragments Home was a finalist for the Bay Area Playwright’s Conference and a semi-finalist for the O’Neill Playwright’s Conference.

Recent directing credits include The Santaland Diaries at TheatreWorks Silicon Valley, Peter and the Starcatcher at Hillbarn Theatre, The Crucible, Yellow Face and Dead Man’s Cell Phone at Los Altos Stage Company, Uncle Vanya at the Pear Theatre (BATCC award for Best Production)Eurydice at Palo Alto Players (TBA Awards finalist for Best Direction) and The Drunken City at Renegade Theatre Experiment. Jeffrey has also worked with the Oregon Shakespeare Festival, San Jose Repertory and is a company member of Ferocious Lotus Theatre Company and SF Playground. He is the Casting Director at TheatreWorks Silicon Valley, a graduate of the Multicultural Arts Leadership Institute and a proud alumnus of the UC Irvine Drama Department.

Locsin, Aurelio
Aurelio Locsin is a writer and actor, and a company member of the Rude Guerrilla Theater Company. More information including reviews at rgasian.blogspot.com

Sandra Tsing Loh is an L.A.based writer/performer/musician. Her books, published by Riverhead Books, include a novel, If You Lived Here, You’d Be Home By Now, which the Los Angeles Times named one of the best books of 1997, Depth Takes A Holiday: Essays From Lesser Los Angeles, and Aliens In America. The latter is based on Loh’s solo Off Broadway show which ran at Second Stage Theatre in New York in summer, 1996. Loh has also been featured at the U.S. Comedy Arts Festival in Aspen, the HBO New Writers Project, and on NPR’s “This American Life.” She is also a regular commentator on NPR’s “Morning Edition,” a show which coincidentally has used segments from Pianovision as buttons.

Currently, Loh is most musically active as a composer for film. She composed and performed on the score for Jessica Yu’s 1997 Oscar-winning documentary Breathing Lessons: The Life and Work of Mark O’Brien, and is scoring Ms. Yu’s next documentary on HBO of the Living Museum. Loh began in the mid’80s as a performance artist; her piano concert “spectacles” were covered by such outlets as People, the Wall Street Journal, GQ, Glamour, the Associated Press, CNN, and even in Johnny Carson’s Tonight Show monologue.

Nearly 1,000 people attended “Night of the Grunion” (March 1989), in which Loh and the Topanga Symphony played a concerto for spawning fish on a Malibu beach at midnight. In “Self Promotion” (March 1988), an assistant flung $1,000 in autographed $1 bills over her as she performed before a stampeding crowd. “Spontaneous Demographics” (September 1987) featured Loh playing a piano abord a flatbed truck in a concert for rush hour commuters on the Harbor Freeway.

Lottman, Anh
Anh Lottman lives in Monrovia, CA. Ms. Lottman graduated from USC as a Master of Professional Writing, in May of 2003. She is also degreed in English, History, the Liberal Arts, and has studied and written for the East West Players. She has worked as a teacher, a grant writer, and a journalist.

Lum, Darrel H. Y.
DARRELL H. Y. LUM is co-publisher and co-editor of Bamboo Ridge, which he helped found in 1978. He is author of both prose fiction and plays.   He has published two collections of short fiction, short stories and drama.  Pass On, No Pass Back was awarded the Asian American Studies Book Award in 1992.  His work has been widely anthologized, and frequently used in English, Speech, and Asian American Studies classes in secondary school and college classes in Hawai‘i, and on the mainland. Oranges Are Lucky was his first play, and has been staged three times by KKT, in 1976, 1986, and 1996.

Dr. Lum received the Cades Award in 1991 and the Hawai‘i Award for Literature, the state’s highest award for literature, in 1998.  He holds a Doctorate in Education from UHM.

Ly, Oskar
Oskar Ly is a Hmong French-American Artist and Organizer. She is a Fashion Artist and Singer-Songwriter with a focus on social justice. She uses the arts and community organizing as a foundation to build community spaces that celebrate authenticity, discovery, and our stories. Her vision is to achieve responsible recognition of her communities, create space for original narratives and lift multi-dimensional identities through creative exploration. She enjoys crafting to liberate beyond words, sharing food, culture and conversations.